Both Sky Wardens and Endrinriggers are the most versatile units you can take in a Kharadron Overlords army. With a fly movement of 12” these are some of the most manoeuvrable Kharadron Overlords units. They have access to decent range weaponry, such as the deadly Drill Cannons and Aethermatic volley guns. They also have some solid combat potential in the form of Aethermatic Saw blades and Sky Pikes. Thanks to the Hitchers special rule these units take up no space on the Sky Vessels. This makes them very strong for the “clown car” list. (see my article on this here!)

Here are 2 examples of unit set ups which fulfil very specific battlefield roles and are popular in the Barak-Zilfin armies.

This 300pt unit can drop a deadly hail of fire at your opponent and keep its distance. You will want to use Aether-khemists to boost the Drill Cannons with Aetheric Augmentation ability. These are the best anti armour guns Kharadron Overlords can take. Drill Cannons have a mighty -3 rend with a Dmg of 3!

You also get 18 shots from the Volley guns. both weapons have a 24″ range making them great for picking off enemy characters and light units. Remember you can split your units fire putting the drill shots into a heavily armoured target and the Volley guns into larger more lightly armoured units.

This unit will be skirting around picking off enemy units and characters at long range.  They can use their speed to hit targets of opportunity with a 36” effective range! They can also tackle light units in combat to take objectives but being quite fragile be wary to charging these guys into a fight they wont fly away from! 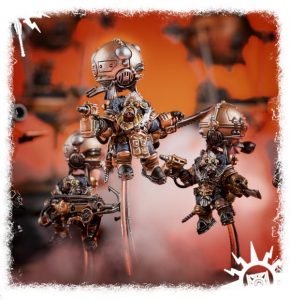 The Aethermatic Saws will be the weapon of choice to buff with the Aether-kemists. With 3 Khemists this gives you 25 attacks with 6 models 3’s and 2’s with a rend of 2 dealing D3 damage! This is hands down the best close combat unit you can run in a Kharadron Overlords allegiance army.

Their shooting is nothing to be sniffed at as well! The Rivet guns giving you 18 shots at 3’s and 4’s rend 1 dmg with a 12” range. But the Grapnels are what makes the unit shine. These allows the unit to pull itself  24” towards a piece of terrain or a 10 wound model at the end of the shooting phase! This gives the unit superior manoeuvrability and allowing you to get within 3” for an easy charge on the turn you drop when using the popular Barak-Zilfin list.

This unit is still fragile so avoid any fights you wont kill what you charge, this unit gives you something the KO’s desperately lack and that is combat power. I would always take this unit as it has a role no other unit can achieve in your army and with the ability to move shoot grapnel and then charge the sky is the limit when it comes to tactical options!

There are a lot more options for these guys than the ones above. For example using multiple small units of 3 makes for effective objective grabbers, however Kharadron Overlords tend to like big units getting the most bang out of the Aether-Khemist Augmentation if taking Grundstok thunderers then these small units could work better.

I would suggest experimenting to see which units suit your play style the best!

Pick up your Sky Wardens and Endrinriggers over at Element Games