Over the weekend, I watched the Warhammer TV coverage of the Age of Sigmar Grand tournament: Heat 3. This is the first major event we have been able to see the Kharadron Overlords in action and I was interested to see where people went with the army design and it seems one sky port has proven popular – Barak-Zilfin.

The most prolific Kharadron Overlords list at the event were the affectionately named “clown car” lists.

These armies rely on putting as much of your army as you can fit onto an Ironclad and using the Atherspheric Endrins to drop down alpha striking the enemy – akin to many clowns squeezing into a small car rocking up, piling out and them murdering everything… Okay maybe its not quite the same as a clown car!

Firstly you have to take the skyport Barak-Zilfin and the Ironsky Command warscroll battalion in your Kharadron Overlords allegiance army.

3 x 10 Arkanaught Company (these are your required battle line, usually all with 3 x light skyhooks)

Then the rest of the points go into Sky wardens or more Endrinriggers (see my article on how to kit out your Sky Riggers!)

This is very important because these chaps do not take up space on the Ironclad they can all start the game off the table along with 2 x 10 Arkanaught Company and the characters in the Ironclad (it can hold up to 25). One unit has to deploy on the table but because one unit sits in the Ironsky Command battalion, the army is a one-drop force giving you lots of control over the game 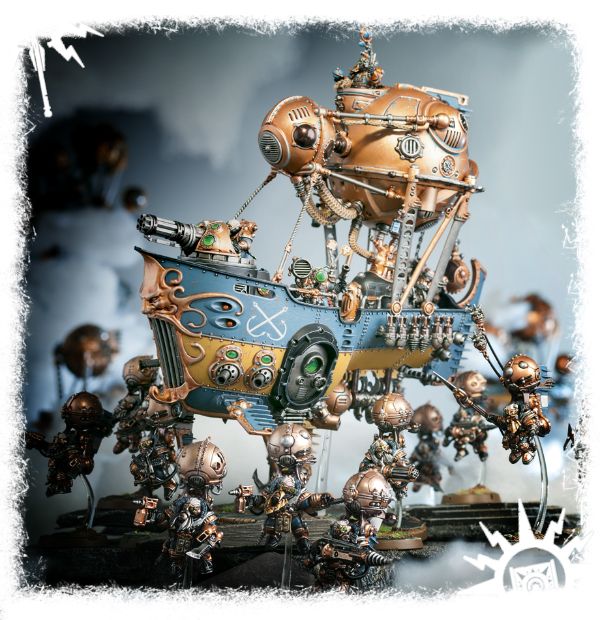 The real strength of this Kharadron Overlords list comes from being able to drop almost your entire army in one go delivering a large amount of damage in a small area (usually best to spring the trap when you can get a double turn). Then using the Aether-khemists to boost the weapons of your chosen unit, unleashing a hail of fire decimating your opponent in one fell swoop.

This is very similar to the Warrior Brotherhood army, which was one of the most popular lists at the tail end of last year on the UK scene and I can see this being a popular Kharadron Overlords build.

You can vary the list up by taking Grundstok Thunderers to sit inside the Iron Clad but the army becomes a 2/3 drop force as one unit of Arkanaught Company gets pushed out of the Ironclad but you can take some very powerful combos of weapons on this unit.

Depending on what units and weapons you have outfitted your units on the boat will determine much of the strength of the “Clown Car” Barak-Zilfin Kharadron Overlords list.

Skyport: Barak-Zilfin
– Additional Footnote: There’s No Trading With Some People

Pick up your army over at Element Games